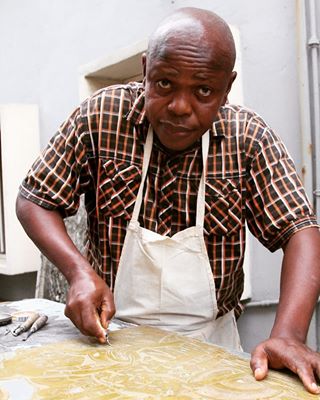 Pius Emorhokpor was born on the 20th of December 1962 in Delta State of Nigeria.  He is a contemporary Nigerian Artist and printmaker of Note.He attended the prestigious Government College, Ughelli from 1975 – 1980 and proceeded to the Famous Yaba College of Technology, Lagos in 1983 to study Fine Art where he majored in Painting and graduated in 1988.Between 1990 – 1994, He worked briefly as a designer/illustrator with Leading Magazine Publications including the defunct ThisWeek Magazine and African Guardian Magazine published by the Guardian press Limited, where he distinguished himself as a cover – page designer.

In 1995, he joined his mentor, Dr. Bruce Onobrakpeya – a foremost Nigerian Artist and leading master print-maker at his Ovuomaroro Gallery in Lagos as Senior Studio Assistant, having previously undergone a one-year industrial attachment at the studio from 1995 – 1996. In 1998, he became a full-time studio artist. Since then, he has experimented extensively and excelled in various Printmaking techniques including Plastograph, Plastocast and other media. His themes are largely centered on the day – to – day activities and way of life in African communities, especially Nigeria.

Some of his experimentations can be seen in works like “Dignity of Labour “and “Edeki” (Market day). He also veers occasionally into abstract and semi-abstract forms as exemplified in his works “Cross of Redemption” and “Osevmo” (father and his Children).  The artist employs the use of richly embellished motifs, strong and exquisite forms. Some of which are borrowed from the rich traditional Yoruba “Adire” textile.  Others are created from inspirations drawn from nature and man-made objects like machines, computers etc.

Pius has participated in several groups, salon exhibitions and workshops locally and internationally. He has also featured in several auctions organized by reputable galleries in Lagos and Abuja. His works are in public and private collections in Nigeria and abroad, including the Ford Foundation Lagos. National Fertilizer Company of Nigeria (NAFCON), GTBank and several multinational companies.